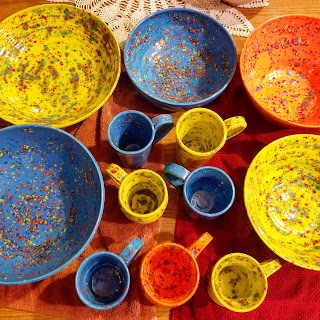 I am not the best at updating my blog, as you can see by the several months hiatus in posting anything new. BUT my hope is this year to really start being more active with my pottery - which also includes my website - in particular as summer gets closer. :)

I had a relatively slow winter - I did several shows in the fall and before Christmas, and then took a break for a month or so. There does not tend to be a lot of shows in Maine in the winter (Jan - May) just because the weather can stop a show in its tracks, and people tend to not get out as much.There tend to be more options once April hits, and the weather starts warming up - so I am excited to have April be right around the corner and to be able to start prepping for more shows! 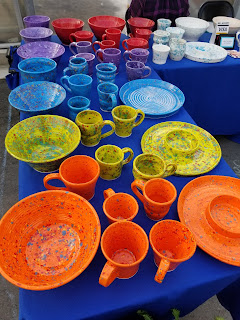 I took a chance and did one show this winter - in February. It was indoors at a large Greenhouse down in central Maine, and it went REALLY well - I will plan to attend that one again in the future :) It was the first time I had attended there, and I signed up on a whim, thinking that I did not have any other shows on the horizon so this would be at least something to do. It was in an area I had never attended, so that was positive in regards to expanding my client base and getting my name out there for new individuals. People seemed receptive to my unexpected colors and style so it was exciting to meet new people.

I find that the spring is hard for me in regards to my pottery because it is really financially intensive. I do not have any large shows so I spend a lot of the spring making and not selling - which gives me a mini heart attack when I track my expenses and income. I KNOW though that I need to make in order to be prepared for the larger shows that do occur - so it will eventually even out, and (hopefully - fingers crossed) lead to me being ahead by the end of it all. This is my third year of doing this - of getting into pottery and making and selling. My first goal has always been to have my pottery fund itself  - to make generally enough from selling to keep on creating, and to learn and grow as a potter in the process. My hope for the future is to expand on that - to be able to make enough so that I can invest more, become larger, and then possibly even have my own shop or space. I certainly don't expect to get rich from this, but I love the idea of having my own place to create and sell. I am toying with the idea of possibly working with other people to have a shop together, but do not know a lot of people at this time - so if you are looking for someone to work with, let me know! :) 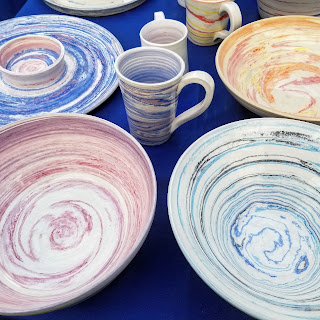 Speaking of shops, I have recently started selling some of my pottery in several shops. In the fall I started selling at Melissa's Maine Made in Ellsworth, and that has been a positive experience. And I just recently this past month or so joined two more shops - Maine Jewelry and Art in Downtown Bangor, and The Local Variety in Bucksport Maine. I am really excited about all three of these options - they are in three different towns so it is positive to get my product to different audiences. And it is just nice to have my work out there and on display in various locations. 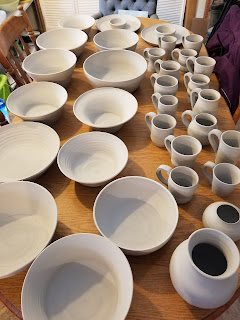 The new struggle with being part of several shops is the reality of stocking these shops. Now I need to find a positive balance between creating and prepping for the shows that I have scheduled, but also building in time to create and restock the three shops as needed. It is a good challenge to have, and I look forward to the possibilities that being part of these three shops provides. :)

Part of my plan for this winter/spring has been event planning - what venues and shows do I want to apply for, and planning ahead for this. In my goal of being bigger and growing my small business, I need to first, join some shops (which I have a good jump on) but second, work on attending more venues and fairs, and work on attending larger venues and fairs. (AND, of course, being able to provide enough product to keep up with it all).

Last year I attended about 8 or 10 so craft fairs/venues - some small and some large. Some were added to my list to repeat this year, and several were marked as do not return. That was the same from the year before that - my first year I had to learn what were good shows to attend, and what were not worth it. So i have been spending some time this spring sorting through which fairs were worth attending last year and what are some new options to try out. Here is what I have lined up currently for this year: 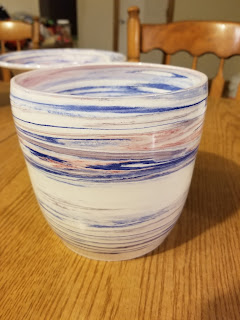 I expect I will add in some other options as the year progresses but these are the ones I am currently signed up for, or in the process of signing up for.  I am excited about them. It is hard, because as I look at this list I think there is plenty of space to pick up more shows in between the others. But the reality is, I need to remember to not set myself up for an unrealistic turn around. When I have a GOOD show, which I am hoping more and more of these will be, it means I sell a large amount of my product, and then have to fill in the spots and gaps that exist. If I can premake items and have a lot on hand then this is not as large of a deal, but often I am then left scrambling to fill holes in my supplies before my next show. If you have read any of my previous posts the turn around for creating items can be lengthy. It typically takes over 2 weeks to have a new piece ready from scratch (and often closer to 3 weeks), which is dependent on me having clay on hand as well as the right color glazes that are needed. So I need to try and do more shows this season, but also remember to be realistic and not set myself up to fail. 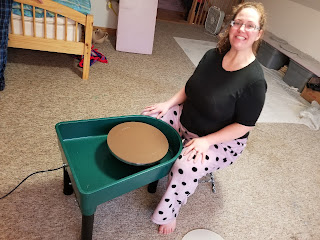 In positive news I just realized I never posted about my newest addition - for Christmas I got a brand new wheel from my husband and family! I had previously been using a beat up second hand wheel that was not ideal, but got the job done. The new one is able to center more effectively, is more stable, and has better control and speeds. So I am in LOVE!

Anywhos. I am excited that it is now spring, and for what this will bring. I have been focusing the past couple months on really creating a lot of vibrant, colorful pieces. I tend to do two different styles - bright pops of color, or more pastel marble colors. I REALLY love the process of making the marbled pieces - there is something so interesting about each piece marbling different - the mystery of how it will turn out. But I tend to find that my bright and colorful glazes sell a little better than my marbled pieces, and I made a LOT of marbled pieces this past fall, so I need to instead focus on building up colorful pieces in my inventory. Hey - no complaining here - I am just excited that people like my pottery! :) 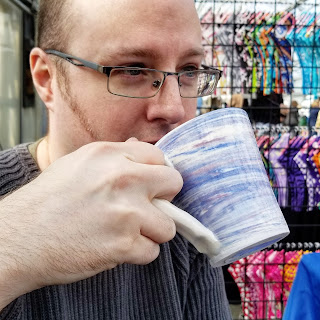 Ok. Again, my goal is to come and create more posts more often, so fingers crossed that I can stick to that plan!

For anyone interested in placing an order or seeing my items, I do not currently have an active ETSY site, as I found I was paying to list pieces and not selling enough to make it worthwhile. So email me (bethanythompson@rsu67.org) if you are looking for something in particular and I can send you some options of what I have in stock! :)

Thanks for reading! PLEASE leave a comment -  no one comments so I don't know if I should continue rambling or shift to approaching this differently - LET ME KNOW YOUR THOUGHTS! :D 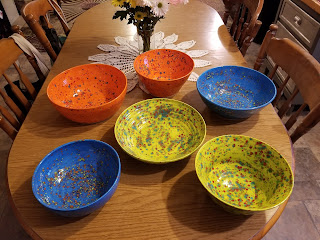 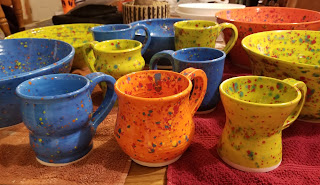 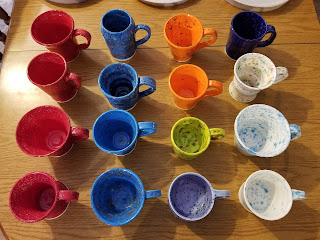 Posted by Author Bethany Thompson at 10:04 AM