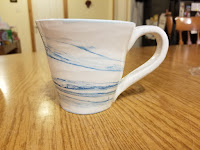 Been a month and a half or so since I have written. In that time I have gotten back to work full time at school, which has greatly impacted my ability to do pottery. Work is going well, I enjoy working with my students, but my pottery must take a back seat at this point.

It is frustrating, to a degree, to not throw as much. I find that I tend to be busy so I try and squeeze in time in the evenings or some on the weekends to get pieces made. I am often tired after work, so my idealistic "I will throw some pottery when I get home from work" is a challenge to follow through with some times. It is even harder to make mugs - the process of making mugs requires me to throw the main piece and let it dry. But it can only partially dry enough so that it can be held - it still needs to be malleable. Then I add the handle and continue to let it dry. My issue is that where I am throwing infrequently, I tend to not have two days back to back to throw the piece and the next to add a handle. But I make it work.

I had two shows this fall so far. I find that I have two different caliber of shows I attend now - a "Typical" craft fair that costs $25/30 to attend, or a large, typically 2 day fair that costs $100+ to attend. So I need to remind myself sometimes which I am attending, and what the expectation is then - I have different expectations for how many pieces I will sell at a small craft fair versus a large one. 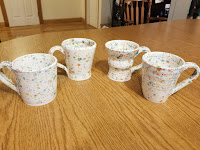 So this fall I have attended two fairs - the first was a smaller, one day /small fee fair in Ellsworth. It went decent -  I sold what I expected. It was nice because Dave came with me for the show so I had someone there to help, and also his mother had a table beside us, she was selling her jewelry. So overall it was nice because there were people nearby to spend time with :)

I had a second show this Fall, at UMaine for Homecoming. This was a larger show, a two day/higher cost show. Actually it was the most expensive show I have paid to attend, to date at least in my pottery outings. And overall I was disappointed. I assumed (incorrectly) that since it was so expensive that I would make that much more - I expected to have upwards of 50+ sales, and was very disappointed to walk away with only 22 sales. So i made just under half of what I had expected. So yes, I made sales, but at times it can be emotionally frustrating to put an entire weekends work/time in, and leave feeling defeated and like it was unsuccessful. YES, overall it was a success - i came out ahead (where several vendors did not, so I feel like a jerk being down about it) but It is hard when the outcome does not align with the goal/expectation.

Some positives that I have observed  - I am starting to grow a fanbase, which is awesome and strange! I have had some repeat customers - people who have one or two mugs, and now want a third, things like that! It is an awesome feeling. Or to attend a fair or show and have someone come up and say, "Oh good, I was hoping you would be here"  - it is such an awesome and great feeling, makes the entire process seem worth while! I hope that things like that continue to happen :)

I have a small custom order I need to get home and work on - I just received the marbling stain in the mail yesterday, so now I can get to work on the pieces - 4 yellow and blue marbled mugs. I am excited to get working on it - I find as time goes on I really, REALLY love making my marbled pieces - I just enjoy the mystery of how the piece is going to unfold - how will the marbling show itself. It is a lot of fun.

I have a couple more craft fairs this winter. I think I had assumed that the UMaine show would have a lot of Christmas sales, but I think i was a little early since it is just October, so we will see how the rest of my shows go. I have another show in a week and a half - a smaller show that Donna (Dave's Mom) signed us up for though Brewer High School. She had heard really positive things about the show, so I have my fingers crossed that it goes well! After that I have a show scheduled right after Thanksgiving - down on the island. Now, the island is where I am from, so that might contribute to my success there. Last year I paid the fee for a one day/small fair, and ended up selling way more than expected. I am hopeful that it can be just as successful this winter! :) And then after that, two weeks before Christmas I am setting up in the Bangor Mall for a 2 day fair. I am hopeful that this will also go well.

Overall I have found this year to be a success - I am happy with how it has gone, and am hoping that the final couple of shows for the year really ends on a positive note. :) Eventually I would like to get a new wheel and possibly a new kiln, and am liking the idea of maybe opening a small shop in the summers - we will see :) But with all that, only time will tell!

Anywho, if you have any thoughts or questions do not hesitate to ask!! :D 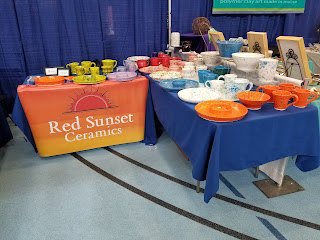 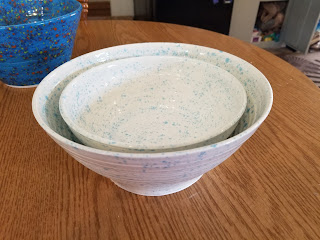 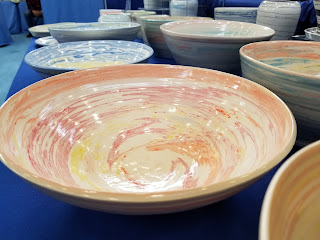 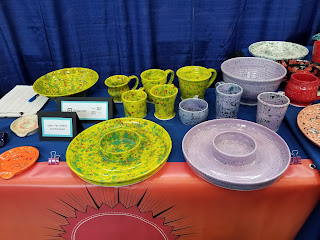 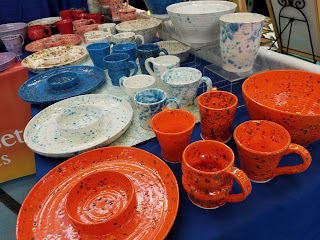 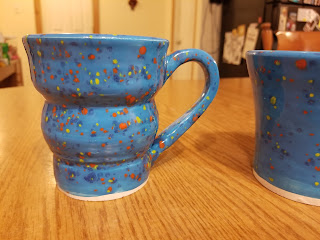 Posted by Author Bethany Thompson at 10:14 AM