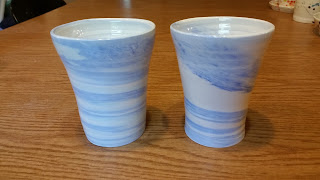 I am excited, I just pulled another successful load from my kiln. In it I had 6 marbled cups, a flower pot with plate, and a plate, bowl, cup combo. Well, and a tall vase, but that was just for me - it has a crack in the bottom that does not go all the way through - i will keep it because it still looks good and is functional, just not sell worthy :)

I am excited overall with how the marbling came out, or agateware, people call it different things. I think of it as marbled.

Some lessons learned from it - go far darker, for bolder. I had gotten a light blue and a medium blue. The medium came out decent, but the light blue is barely visible. Part of that is also related to my stingy ways - again, a learning curve here. I had only gotten 1/4 pound bag of each stain, and used it sparingly, wanting to make it last. The reality of that is, I got 6 cups (2 barely visible) and I used it to make several other pieces (probably 6 other pieces) but it was so faint that I will just glaxe over it like normal. So lesson learned, go for darker, and do not be stingy!

I already ordered a new blue, one that was slightly cheaper so I got a full pound for only slightly more. It is between a medium blue and dark blue, so hopefully it being slightly darker and also me using more of the stain will make some pieces that POP! :) We will see :) I am loving it in general, but do want to work on making pieces that have a more pronounced pop of color. I would also like to expand and get some other colors, but getting the stain can be expensive, so we will see how it goes. Overall though, I am really happy with how this wave of cups came out. Sure, I need to work on my form and proportions, but hey, I am happy!

I also created a plate, cup, bowl combo on a whim with a splatter of blue, green, and purple on it, and LOVE how it came out! I did this random splatter because I am very low on my green, and I was like, huh, why not try that? And I really enjoy how it came out. I think I will do more like this in the future, with different color combos - I am thinking yellow, orange and red (not that I have a red), things like that. Anywho, happy overall with how it came out! :)

*** I initially planned on posting this during the first week of August, and my internet was being wonky so I did not post it, and just realized it as I came on to post again. So this is three weeks late, and I have included some photos from this discussed firing, as well as a firing that occurred after the one mentioned above. 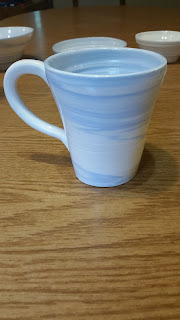 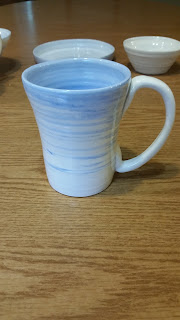 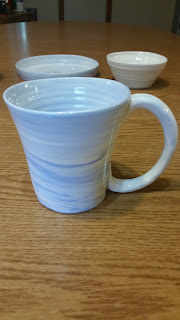 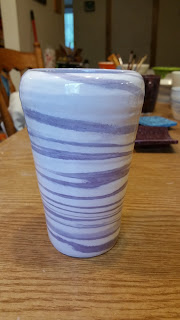 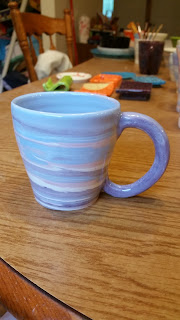 Posted by Author Bethany Thompson at 11:02 AM